Close followers of Ellitopia (namely the few people who are actually active on the Discord Channel) will already know that I have made a very odd decision to start making a Football Management/Fantasy Football game! I thought I would take some time to, kind of, officially announce it and give some details about the bizarre decision I made regarding platform.

I've been a fan of Fantasy Football and Football Management games for a long time. I don't actually enjoy watching or playing football, but I'm a big fan of management style games, and the football management genre has always provided a good sense of progression and achievement, something which attracts me with all games, not just the management genre. So, when someone in my discord channel said...

So I fired up a development environment and started ham-fisting the keyboard. I'll come back to the choice of environment shortly... eventually.

What Makes a Football Management Game?

Now firstly, let's get one thing straight. Football is a game where two teams of 11 players kick a ball around a pitch... with their foot. Foot... Ball. From here on in, when I talk about football, you readers from West of the Atlantic can put your notion of throwing a rugby ball to each other to one side. </rant>

I've played my fair share of Football Management games in the past, and each has shaped what I think a football management game should contain. Obviously, you have to have teams, players, a manager, some way of playing a match between two teams, and then some way of keeping score, league tables, championships and the like... football is football. Fortunately most of that stuff follows pretty standardised formats and patterns, so it's fairly easy to form a mental picture of what that looks like in code.

Other games however have variations on how certain other elements of football management are handled. For example: 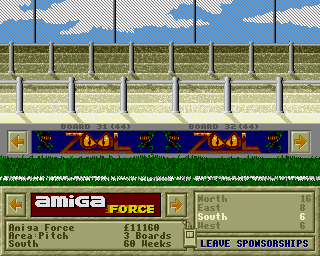 This was one of the first football management games I ever played, on my Atari ST. I never played the first one, perhaps I was too young. I was 11 when this one was released. It was extremely simple, but had some important aspects that you had to manage. The one feature I remember most about the game was the handling of pitch-side sponsorship boards. Sponsorship is perhaps the main way large football teams make money, with ticket sales only really for day-to-day stuff. You're never going to buy Ronaldo off the back of Joe Public paying to watch the match. The way Premier Manager handled sponsorship income was quite engaging and highlighted the importance of this revenue stream. Sponsorship management is something I will need to get right if I want to make a football management game. Perhaps not to the detail of picking where pitch-side boards go, but at least negotiating and signing sponsorship contracts. This game also had a good stadium construction system that helped you feel like your team was actually growing over time. That would be a nice to have feature. 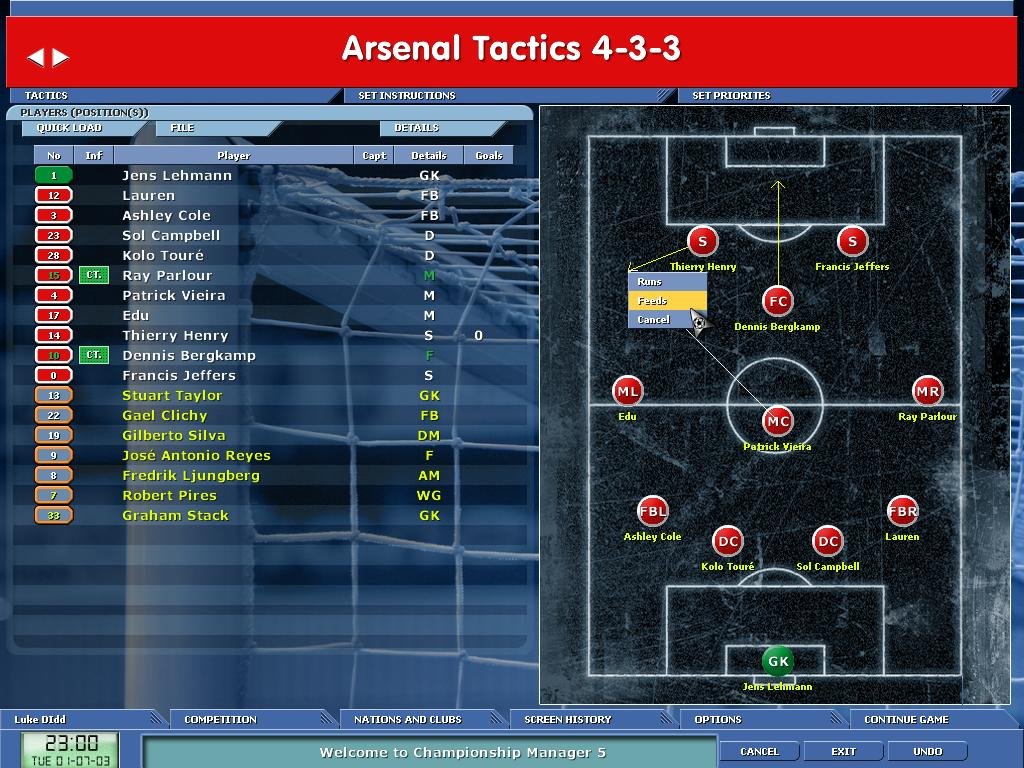 I didn't play many of the Championship Manager games, but they were by far the most popular management games of their time. The predecessor to the now popular Football Manager, Championship Manager was highly focused on data. Player stats, team history, player progression, there was so much data I personally found it overwhelming and their interface was not particularly intuitive, but the fact that the data became the centre of the game was important for the games popularity. It also got a license to use real player and team names, unlike some other games that had you bidding to buy Eric Kantoni who played for Redchester United. Championship Manager game the player the feeling that their decisions mattered and had some impact on the game results. That's important... we need to include some kind of decision making over and above buying players, that actually feels like it makes a difference.

This behemoth of football management games emerged from the Eidos studios when Sports Interactive split off to start their own game. It originally bore the Championship Manager title when it started in 1992, but was renamed in 2004 after the split. This management franchise takes data to the nth degree. There is so much data available in the game, you have to turn some off at the start to allow the game to run properly. This incarnation of the Football Management game brought the idea of the match engine to life. Matches feel like they're really happening right now, albeit in accelerated time. Your management decisions feel like they have a real impact. You can talk to individual team members to boost morale or to issue discipline for getting a stupid red card. Contract negotiations are a tense negotiation between attracting the player and staying within the confines of what the board will allow you to spend. Football Manager is clearly the yard stick by which all other management games will be held... and I can't hope to compete against something like that. But I can take some tips from some of their other simpler competitors...

So this one takes a step back, but also forward at the same time. Top Eleven is a mobile football management game which takes the classic concept, simplifies it, but makes it multiplayer, and slows it down to a more casual gamers pace. This game focuses on player transfers, training, and stadium improvement. The concept is that you play one or two ranked matches per day, either as part of your league or a cup game, and all games are against other players (or bots for when the player is absent or set up their team and then went to play Among Us instead). This slower pace of sim allows you to spend 5-10 minutes per day playing, but with your decisions still affecting the outcome of games. Whilst there is some of the data available in game, it doesn't play as big a role in the outcome of the game, it's more a brute force method focusing on a single star rating which is kind of an average of the players stats for their position. You can train specific stats if you choose, but in my experience you can blanket train the whole team with a few mixed drills and the team generally gets better. What I like about this game is how the multiplayer aspect is present but not too in-your-face (no chat trolls etc, since there's no global chat). I don't like the microtransactions to buy morale and fitness boosts etc, but it's a mobile game so what are you gonna do.

Tying it All Together

So I want to come up with a game that is a weird mix of what I know, with my own flavour. I want it to be a simple, casual multiplayer experience that gets you involved and makes you want to play for a little bit each day and feel the reward of making the right decisions, or the sting of making wrong ones. So that's what I'm going to try to do. And I'm doing it in Odoo...

What in Ronaldo's Name is Odoo?

You would be right to ask that question, because Odoo is certainly not a traditional gaming platform. Odoo is a business platform, designed to help businesses manage their day to day running (invoices, stock control, HR stuff, etc). At the same time, Odoo is the software I work with for my day job. It's what I know, and I've come to feel confident that I can make Odoo do whatever I need it to do, given enough time and a soft enough cushion for my PC to land on when I toss it through the window.

The software itself is highly database driven, which is actually ideal for a data-driven game like, oh I don't know, a football management game. It's also cloud based software that already knows the concept of user login and security, permissions management, online chat, front-end website construction and all sorts of other little things. Why not use that foundation to make a browser-based, multiplayer, data driven game? OK I don't think anyone else has used this software to do that before, so I will likely hit some roadblocks that no-one will have hit before (I already have in fact, but that can be the subject of another blog), but what an exciting challenge, and a great way to even better expand my knowledge of the platform I work with in my day job.

Odoo is built in Python, which is an easy language to learn, and a well enough used language that it has all the resources I need in some repo somewhere that I can pull in. OK it's not traditionally that great for game development, but I'm not making a Triple-A FPS game, I'm making a game that needs a robust database system like PostgreSQL... oh look, that's what Odoo uses.

An added advantage is, this website already uses Odoo under the hood. I converted it to Odoo with the last redesign, so when the game is ready to be launched or tested, I can just upload the module to Ellitopia.com and all the existing users can play. I just need to add a few pages to let people sign up and get started!

OK This Blog is Too Long Now

You're not wrong. You probably gave up reading already, I best wrap it up.

SO, I'm making a game in a business software platform. It's an odd choice, but I think it might just work. I've already put together a player, staff and team generation system, and I've built the first version of a match playing engine which generates match results based on the comparative skill levels of the two teams, along with some Pseudo-random wizardry.

My current codename for the game is Odoo-FF. I haven't decided what to actually call it yet, so by all means send me some suggestions.

There's a lot to do before it will be ready for people to actually see it, but I've made quick progress so far and I'm pleased with the direction it's heading in. Watch this space!

We use cookies to provide you a better user experience.